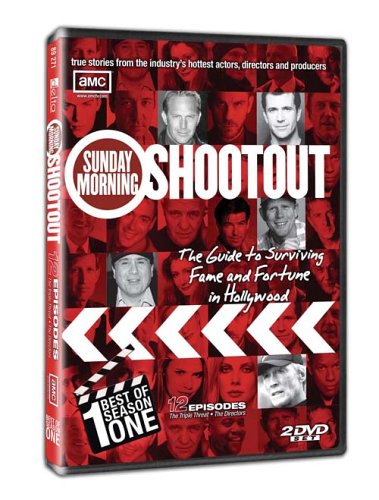 Peter Bart (Editor-in-Chief of Variety Publications) and Peter Guber (Chairman and CEO of the Mandalay Entertainment Group) present your favorite stars, directors and film industry heavyweights in SUNDAY MORNING SHOOTOUT, the definitive guide to mastering the secrets of success in Hollywood. Over the course of the show, superstar guests including Clint Eastwood, Jude Law, Charlize Theron, Denzel Washington, Mel Gibson and many more share personal stories and experiences illustrating the skills and confidence that are absolutely necessary to understanding the business of entertainment and achieving superstardom. From indie filmmaking to big budget blockbusters, from opening weekend box office grosses to what itÃ¢ÂÂs like to win an Academy Award, the Shootout Experience is a must-have resource for aspiring filmmakers and everyone who loves movies.

Disc One amp; Two:
THE DIRECTORS
THE TRIPLE THREAT
ACTOR/DIRECTOR/PRODUCER

ADDITIONAL BONUS FEATURES include a glimpse into Season 2 with such high-wattage talent as George Clooney amp; Bruce Willis and a Behind-The-Scenes look at what really happens when the cameras stop rolling on the Shootout set. The documentary, A Day In the Life features insightful and candid interviews with Bart and Guber as they manage their respective empires before heading to the studio to shoot another installment of the show.

As a casual coffee-klatch for Hollywood insiders, Sunday Morning Shootout is the ultimate film-industry talk show. These first-season episodes originally aired on American Movie Classics in 2003-04, and cohosts Peter Guber and Peter Bart bring decades of show-biz experience to their fascinating discussions. Boston-born Guber was a former head of Columbia Pictures, coproducer of the Batman franchise, and current president of Mandalay Entertainment Group, while Manhattan-born Bart had been a successful producer and top-level executive before becoming an acclaimed book author and editor-in-chief of Hollywood's venerable trade-paper, Variety. Guber is an outspoken, opinionated champion of film as a corporate enterprise, and Bart is a soft-spoken, even-tempered defender of film as an art form. They complement each other perfectly as opposite sides of the Hollywood coin, attracting A-list guests who discuss their careers with remarkable candor. Enhanced by pop-up boxes containing facts, figures, and industry terms relevant to the movies and issues being discussed, each episode begins with topical questions exploring a timely facet of show-biz strategy, followed by the weekly guest interview, brief news items from show-biz reporter Linda Grasso, and answers to viewer e-mail.

"p" This two-disc set (one of three in the "i"Best of Season One boxed set, available separately) is divided into two guest categories: "The Triple Threat" devotes six episodes to actor-director-producers (or "hyphenates"), each providing their own unique opinions and anecdotes from their stellar careers. Danny DeVito describes how his production company, Jersey Films, grew beyond his original "boutique" expectations; Keviin Costner defends his love for Westerns and observes how movies need to be "massaged" in editing to maximize their potential; Sylvester Stallone discusses the hazards of fame and his post-"i"Rocky future; and Clint Eastwood describes the difficulty of getting "i"Mystic River produced in a risk-averse Hollywood climate. Kevin Spacey (with Lions Gate executive Mike Burns) talks about his labor-of-love Bobby Darin biopic "i"Beyond the Sea, and the DVD's highlight is a complete show devoted to guest Mel Gibson and the controversy surrounding his just-released film The Passion of the Christ.

"The Directors" devotes six episodes to a broad spectrum of commercial and artistic achievement, beginning with Ron Howard and producer Brian Grazer discussing the secret of their successful long-term partnership. Edward Zwick (Glory, The Last Samurai) talks about working with Tom Cruise, disappointment about not directing Shakespeare in Love (which he produced), working in television, and the passage of time as the only true litmus test of a movie's success. To promote their latest films, Brett Ratner appears (with "i"After the Sunset star Pierce Brosnan); comic book fan Kevin Smith discusses "i"Jersey Girl, his aborted "i"Superman project, and "i"The Green Hornet; Matthew Perry ("i"The Whole Ten Yards) discusses comedy with directors Garry Marshall and Jonathan Lynn; and the Wayans brothers (Keenen Ivory, Marlon, and Shawn) discuss the making of "i"White Chicks. While these shows may be of varying interest and long-term value, "i"Sunday Morning Shootout is a lot like Hollywood itself: It deals with movies, talent, and achievements that are both timeless and ephemeral, and only hindsight allows us to know which is which. "i"--Jeff Shannon

literary devices refers to the typical structures used by writers in their works to convey his or her messages in a simple manner to the readers.  When employed properly, the different literary devices help readers to appreciate, interpret and analyze a literary work. Below is a list of literary devices with detailed definition and examples.