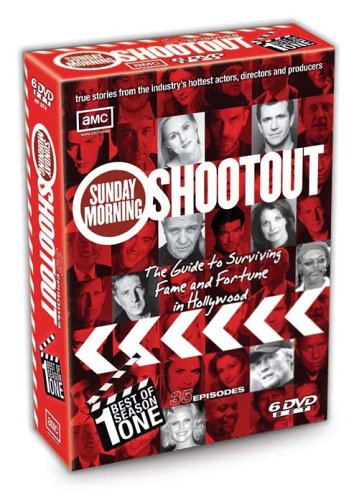 Peter Bart (Editor-in-Chief of Variety Publications) and Peter Guber (Chairman and CEO of the Mandalay Entertainment Group) present your favorite stars, directors and film industry heavyweights in SUNDAY MORNING SHOOTOUT, the definitive guide to mastering the secrets of success in Hollywood. Over the course of the show, superstar guests including Clint Eastwood, Jude Law, Charlize Theron, Denzel Washington, Mel Gibson and many more share personal stories and experiences illustrating the skills and confidence that are absolutely necessary to understanding the business of entertainment and achieving superstardom. From indie filmmaking to big budget blockbusters, from opening weekend box office grosses to what itÃ¢ÂÂs like to win an Academy Award, the Shootout Experience is a must-have resource for aspiring filmmakers and everyone who loves movies.

Disc One amp; Two:
THE DIRECTORS
THE TRIPLE THREAT
ACTOR/DIRECTOR/PRODUCER

ADDITIONAL BONUS FEATURES include a glimpse into Season 2 with such high-wattage talent as George Clooney amp; Bruce Willis and a Behind-The-Scenes look at what really happens when the cameras stop rolling on the Shootout set. The documentary, A Day In the Life features insightful and candid interviews with Bart and Guber as they manage their respective empires before heading to the studio to shoot another installment of the show.

Sunday Morning Shootout is the only show-biz series that really matters. In a TV landscape crowded with tabloid news and gossip shows, SMS offers that most valuable of Hollywood commodities: an insider's perspective. When these shows first aired on American Movie Classics in 2003-04, cohosts Peter Guber and Peter Bart were film-industry veterans whose collective experience placed them in the upper echelons of Hollywood power; Boston-born Guber was a former head (with former partner Jon Peters) of Columbia Pictures, coproducer of the "i"Batman franchise, and current president of Mandalay Entertainment Group, while Manhattan-born Bart had been a successful producer and top-level executive before becoming an acclaimed book author and editor-in-chief of Hollywood's venerable trade-paper, Variety. Their conversational dynamic gives SMS a fascinating, authoritative point/counterpoint intelligence: Guber is an outspoken, opinionated champion of film as a corporate enterprise, and Bart is a soft-spoken, even-tempered defender of film as an art form, with a sarcastic streak every bit as entertaining as Guber's good-natured jabs at Bart's wistful nostalgia for the classic studio system. They complement each other perfectly as two sides of the Hollywood coin, and with ready access to Hollywood's elite, they attract A-list guests willing to discuss their careers with remarkable candor.

This six-disc boxed set (with each of three two-disc sets also available separately) compiles 35 episodes from the first season, each disc covering a specific category of Hollywood personnel. While all of the episodes tend to revolve around the general topic of surviving and thriving in Hollywood, the varied guests shape each episode according to their individual identities as "triple-threat" hyphenates, directors, producers, or actors. In the case of "The Oscar Goes ToÂ," every kind of guest participates in an all-inclusive discussion of the Academy Award and its importance, or negative effect, on the overall spectrum of the motion picture industry.

Enhanced by pop-up boxes containing facts, figures, and industry terms relevant to the movies and issues being discussed, each episode begins with a pair of topical questions exploring a timely facet of film-industry strategy (typically a forum for lively debate), followed by the weekly "shootout" guest interview, brief news items from show-biz reporter Linda Grasso, and answers to viewer e-mail. The timely nature of the show guarantees that some of the material will be ephemeral, but the series is certain to retain long-term value as an audiovisual history of Hollywood business in the early 21st century. Even though SMS was taped on a coffee-house set in Hollywood's legendary Raleigh Studios, watching these fast-paced, efficiently structured shows is the next-best thing to eavesdropping in L.A.'s trendiest show-biz eateries. --Jeff Shannon

"They [Gueststars] can let their hair down a bit and really talk: beyond the standard funny anecdotes and publicity-junket answers." -- Brendan Howard, Home Media Retailing, Dec 18, 2005